A couple of blog entries ago, I started playing Dishonoured, and now I’ve finished it.

I tend to play such games at the easiest level. I find the task of hunting down and killing baddies, and the corresponding getting fragged, really rather dull. Some kind of challenge is necessary for a game, obviously, but I find the underlying presumption of this genre, that the player is an incredible hero, the ace of aces, I find that so childish. 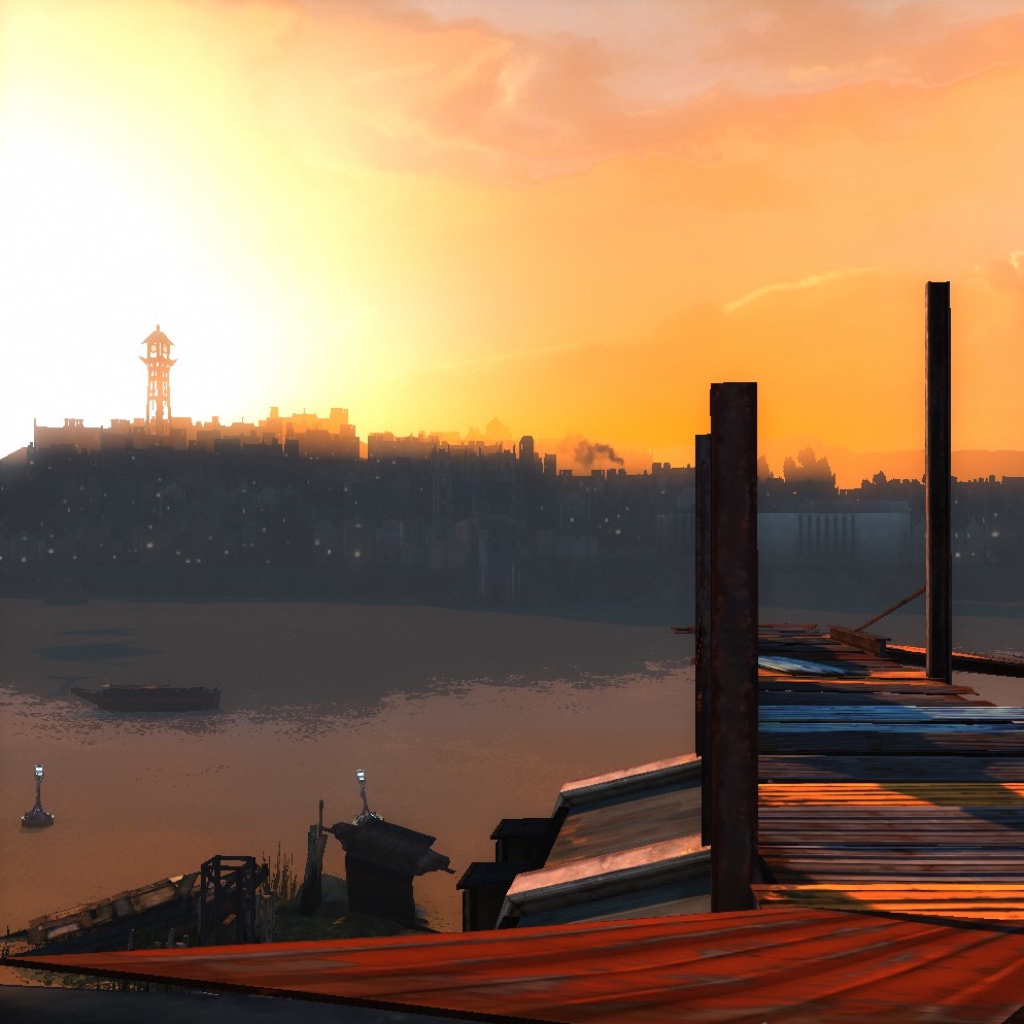 My playing at the easiest level is no comment on the game itself. The game play was balanced, intuitive and inventive. The game’s not a walkover, even at the easiest level. There’s a good number of different challenges to overcome, with little repetition, so things always stay interesting.

Indeed, it was the game that kept me going when I was unhappy with the story, and a good thing too. I felt the early plot was rather clichéd, and, frankly, plodding. It turned out that it’s no such thing, I was being lulled. I was completely and utterly caught out by a major plot twist.

Not only did the plot improve significant with the twist, the characters got more interesting too. Oddly, though, although the main characters put on some sparkle and flaws, they never really unflattened. Instead, incidental characters gained greater depth. Perhaps I was listening to them more carefully after the plot twist bought the story alive for me, but I wonder whether a different set of writers came in, who rescued the original plot by adding the twist, and a lot more besides?

One area where the gameplay makes the plot feel forced is the assassination alternatives for the player. Should the player kill or stun? Should (s)he assassinate the target, or arrange an alternative non–lethal fate? I’m one of those people who will always chose the non–lethal option. Clearly, more than a few people feel the same. I guess some simply won’t buy the game if they’re not there, since, as is common in the genre, the game designers have gone out of their way to put them in.

In Dishonoured, these non–lethal options have been woven into the plot, but I’m not so sure about them. They feel a little forced. Some, indeed, turn out to be arguably worse than assassination; slavery in mines for the guys, sex slavery, perhaps, for the ladies. On the other hand, in some games, you leave the character stunned, and that’s it. Here, at least, the designers have attempted to weave the decision into the story, requiring extra actions to achieve a non–lethal result. In that respect, this ethical option adds to the challenge, adds complexity to the game, which enhances it, so, overall, I appreciate what’s been done, imperfect as it is.

I played the game for the story, and it wasn’t bad. The obvious social flaws reflect the obvious flaws of the Victorian period, from the modern perspective, so they are not flaws of the game, but flaws of the Dishonoured society (sorry, but I couldn’t resist at least one shaggy dog sentence). There isn’t so much social invention here, but there is good reinvention, description if you will, set in a steam punk empire. I appreciated the effort the Dishonoured team put into their characters’ appearance, the dress sense, even the haircuts. They all felt unusually right for a game. 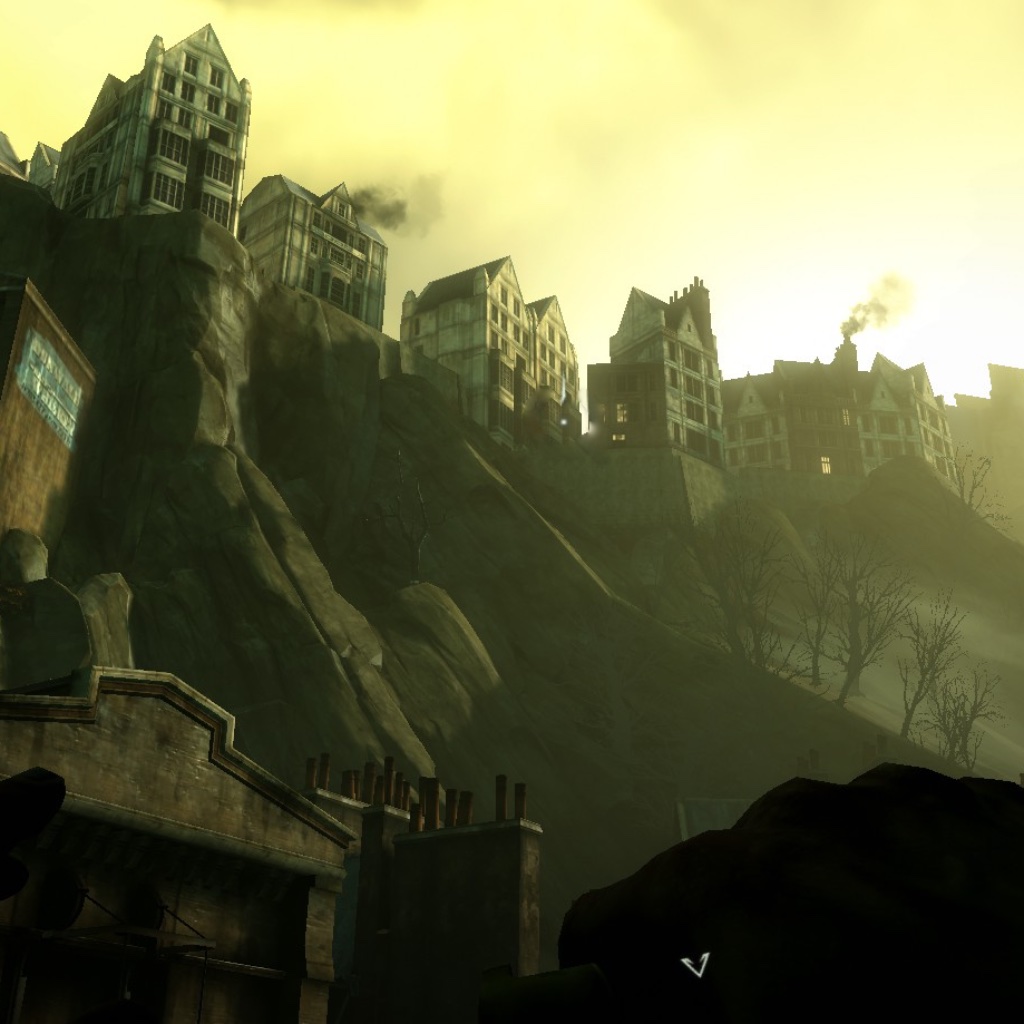 The physical setting, particularly the architecture, seems to me to be an odd mixture of 16th, 17th, 18th, & 19th imperial blighty, with a steam punk edge that has an odd connection to the architecture of the futurist game Deus Ex. It works as architecture, and it works to emphasise to the player that they’re in an alternative history, not that that needs emphasising. A lot is more than rundown, it’s destroyed, as the plot requires.

I have no clue whether the poor parts of Victorian imperial blighty were the same, if less so, but I can believe it. Dishonoured rightly emphasises the class divisions of those times, a class division that continues to scar many anglophone countries in our world, particularly the US. There is social comment here, indeed it lies at the heart of the plot. It’s oddly prescient of Trump, actually, although it’s not precisely the same: Dishonoured was produced nearly a decade ago. In the game timeline, before the game itself starts, the plot initiator has ordinary people he despises killed, but lost control of the mechanism, whereas Trump merely passively kills his child victims, by refusing to fix a systematic flaw he has every power to fix. Their hearts are enslaven to the same devil.

Like Deus Ex, and I suspect like quite a lot of the genre, there were a lot of extra goodies hidden away in tacked on nooks and crannies. Ok, so they help the progress of the player, but, like Deus Ex, they felt opportunistic: you could almost see the staples. This is a genre problem, not a specific Dishonoured problem.

In both games, I find there were too many flats on the nth floor with only a window exit. Dishonoured is not quite as bad as Deus Ex, at least the designers usually remember to add a fake door, and the setting allows for damaged buildings, but, all the same, I’d have preferred better integration of the various crannies in their surroundings. In gist, how are all those ordinary characters meant to have set a roaring fire in all those abandoned rooms that can only be accessed by jumping across rooftops using rare and special aren’t I wonderful I’ve got a God up my arse magic?

The setting, the vista, the architecture, the scenery, the landscape, whatever you wish to call it, was impressive. There’s simply an overall quality that appeals to me. The team behind Dishonoured have created an impressive faux–Victorian world, an alien steam punk alternative history.

Overall, I liked and enjoyed the game, and will be playing the next Dishonoured when I’ve a few more days free. I might even invest in the extra stories tacked on to the game and sold separately, although my experience of such things puts me off.