In Firewatch, you play a guy who needs time out from a harsh personal situation (different game, same horror). You take advantage of a job offer to become a warden in an American National Park, watching out for, and ideally preventing, fire. You live and work alone in beautiful open countryside, encountering the occasional hikers. You only regular human contact is with your boss, over the radio.

The game solves a lot of the barriers to small studio games in a very natural way. There’s a very good reason why you hardly see anyone else: you’re working in the middle of nowhere. In fact, you do see some other characters, but only at a distance. Indeed, the designers tease the player here: two such distant characters are drunken teenage girls skinny–dipping, and all you, the player, see are dots distant in a lake. I, like many guys I suspect, find my inner teenage boy wants to replay that section to see if a different conversational gambit entices an … erm … better view of the situation. I strongly suspect it doesn’t, given the game comes with no adult–only warnings. 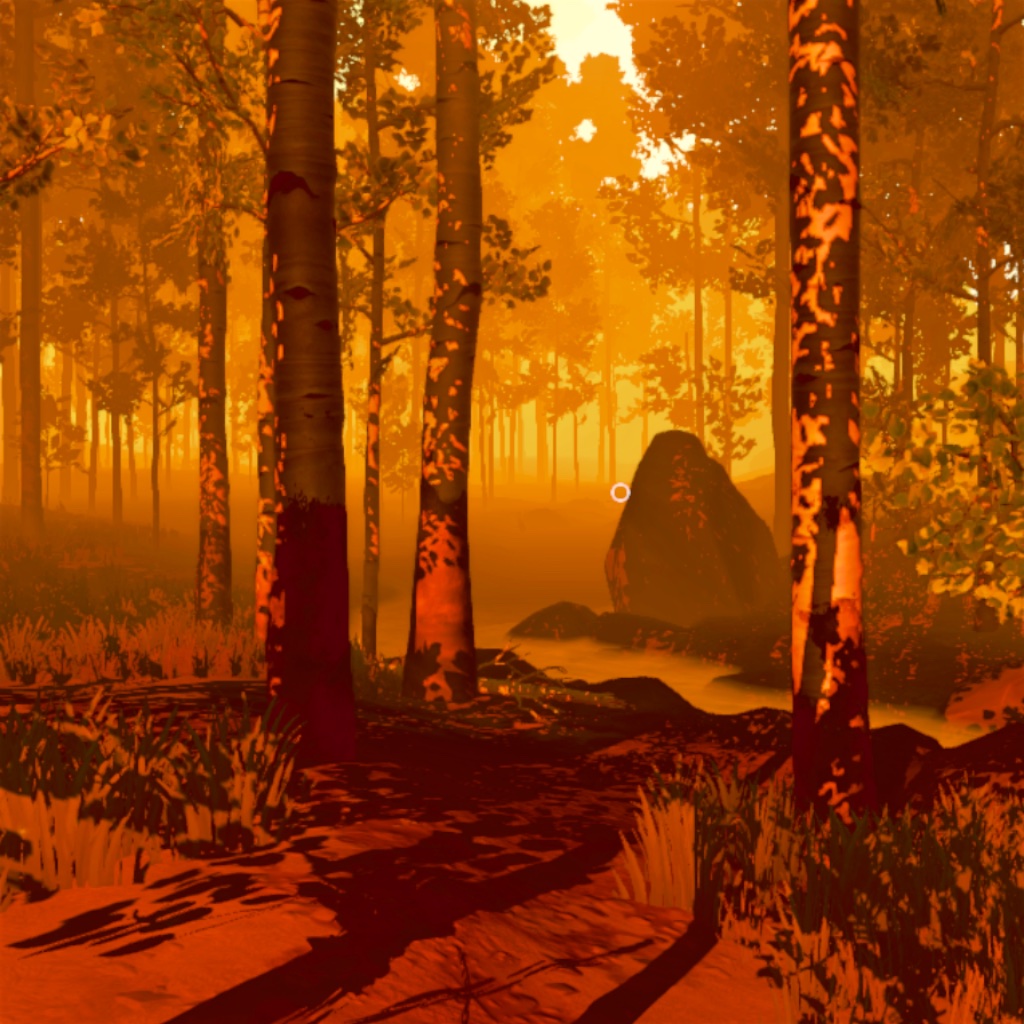 Which leads on to another point: conversations. Despite this being a game in which you see no–one, except at a distance, this is a conversation rich game. Most of the time, you’re talking with your boss over the radio. The boss part of the conversation soon vanishes in the haze of isolated people needing to communicate. This works very well; it produces natural dialogue with some great moments of humour. Indeed, I find I want to replay these conversations, too, to find out if my natural stand–offish conversational approach prevented a better friendship, or perhaps more, building between the characters. I’ve never found myself quite this engaged with ordinary people stuff in a game before. It’s impressive.

It is imperfect, though. There were a couple of places where I did game things in an evidently unexpected order: I got the second half of a conversation before the first half. This is a minor faux–pas, it didn’t interfere with my enjoyment.

This is not to say the more traditional game stuff is uninteresting. You are in the open countryside, and there’s some very rich, very well put together countryside to explore and enjoy. I really wish there’d been more of it. I really felt isolated in the American wilderness as I explored the landscape. Now, the game does a number of tricks to keep you on expected paths, as do all games, and in a couple of places the open countryside felt a little too directed (one cannot climb on rock formations that appear perfectly climbable, for example), but this doesn’t matter. Much more to the point is that each piece of created countryside has its own character, so it’s not all the same in a different piece of the map. Here, these trees predominate. There, it’s that kind of grassland. Over there, it’s those trees. And over here, it’s these different grasses. Someone put a lot of effort into making this wilderness rich and diverse, and it shows.

The game play works too. There’s actually not much different to the norm, but the game doesn’t need anything odd. The game includes rappelling: I’ve never rappelled in my life, so I’ve no idea if it’s accurate, but it feels right. Beyond that, you clear scrub, you open doors, you use tools, you knock things over, you pick stuff up. Most of all, though, you explore.

The one thing I did find a little annoying in the game mechanics was an issue with the radio conversations: you have to respond fairly quickly to something said, otherwise it is lost. Of course, when you’re doing something else, you don’t respond, as per real life, but, unlike real life, there’s no “sorry, what was that?”. You can’t come back to the conversation and continue where you left off. There’s a timeout on responding to conversations, and I found it far too short. But this is a minor quibble.

The game is decorated with books, each of which have the usual publisher’s precis on the back, none of which are as good as the plot of the game itself. Actually, this is the first game I’ve encountered in quite some time with an excellent plot, worthy of a good novel. The story, the motivations, the events, the development, the characterisation, the dialogue, all fit together naturally.

Overall, a very good game, and I’d strongly recommend getting hold of a copy. Indeed, if you like story–rich adventures, as I do, for the plot alone this is a must–buy game.