There was a steampunk festival this weekend, at the heart of fond–de–gras. We went along to have a look.

Boy, was it fun. I took lots of photos of people dressed up to the nines in their steampunk outfits, and my partner enjoyed herself not buying anything but admiring what she saw.

Steampunk has an interesting background. It’s far more than style, it’s an alternative Victoriana. It comes from science fiction. For example, what could have happened if Charles Babbage had finished his analytical engine in the nineteenth century, so giving the Victorians computers? We know what happened to us when computers came along, how they profoundly altered our world: so how might Babbage’s mechanical computers have changed the Victorian era? 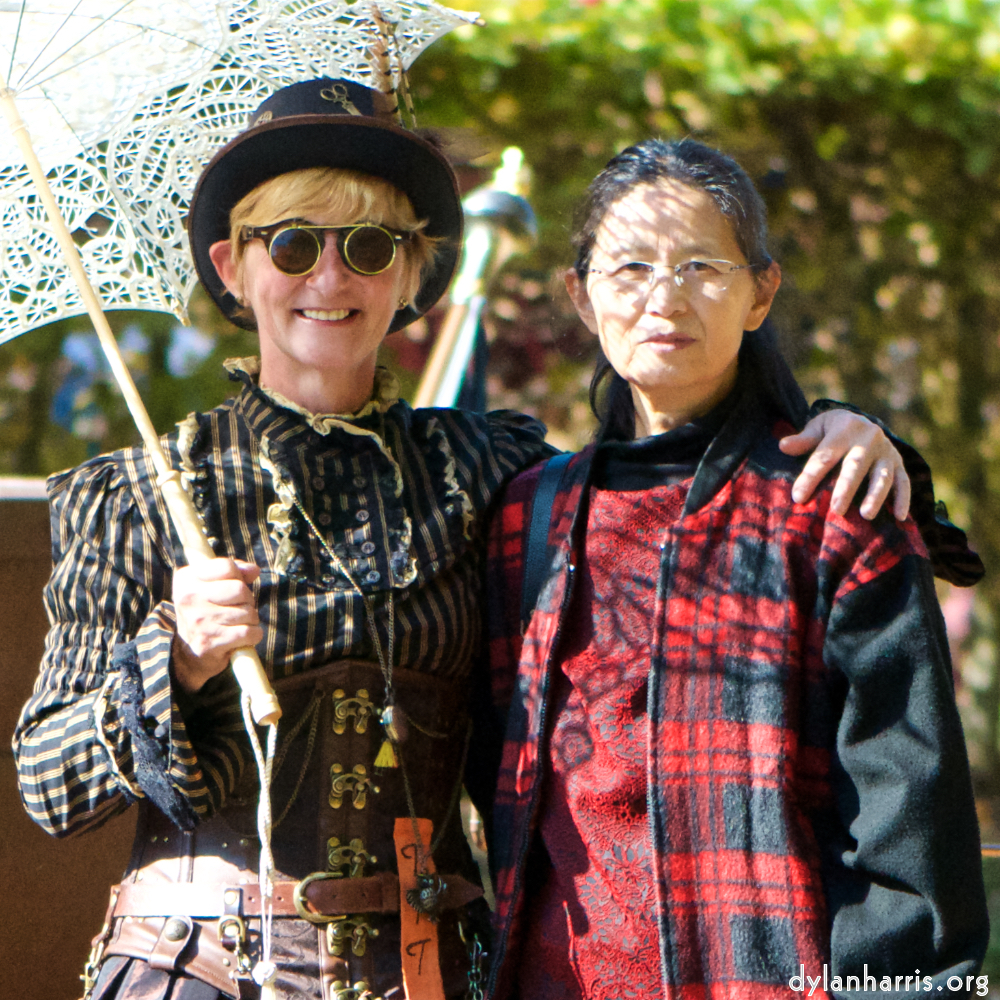 There were lots of people there who had truly done themselves up in fantasy Victoriana. Did they want to be photographed? Of course they did! Well, most were willing to play ball, anyway. I got a set of steampunk portraits, some of which worked. I’d like to thank everyone who kindly let me snap them, and for all the work they put into looking so good.

I have to admit that, while I was there, I thought I’d brought the wrong lens, a 120mm macro lens rather than a standard 50mm, or even a wide–angle lens. But, looking at the results, it was absolutely the right lens. Admittedly, I’ve not caught the glorious outfits many people wore, but that was more than compensated for by the expressions on so many faces. My subjects were seriously enjoying themselves, and many, I think, particularly liked being at the courageous end of the photographer’s lens.

I’ve never been one to dress up myself. In college days, fancy dress was mostly an excuse for the ladies to wear less clothing, and the gentlemen to play the kind of faux monsters such ladies enjoy. Well, it was a lot more than that, but, whatever, parties were rarely example of convincing outfits, more an excuse to paint a toilet paper roll tube green and wear it on your ear, or whatever. I never got into it, as you can tell.

The trouble is, the same goes for formal men’s clothing. I find it dull and fussy. You has to be very careful to keep it very neat, yet generally you end up looking as bland as a lawn. (Upright middle–Englanders really do spend great effort and money erasing texture from grass, even though replacing it with maintenance free green concrete would look just as uninteresting.) There are exceptions, but I’ve got neither the necessary aristocratic bank balance nor the necessary aristocratic tailor, to go there.

Fortunately, I’ve never been in a position where I had to wear top notch formal clothing; I’ve always been able to get away with high street tat. But if I did, well, sod the formal expensive suits, I’ll go find a steampunk mart, or ideally a specialist steampunk tailor, and get myself something light on the glitter punk and heavy on the hard steam.

We’ll definitely go to more of these celebrations. It’s not often I get the chance to take portraits of willing strangers.