One of the small, first–world problems when travelling, is coffee. Being solely dependent on a host’s or hotel’s choice of coffee can be … depressing. This is not a serious problem, one can find a café usually, but not on Sundays, not until the lazy bastards get around to opening. Cafés in uncivilised countries don’t open until the early afternoon, or 8am as those ultra lazy sleeping–in types call it, long after I need my coffee. You can tell I need my antisocial a.m. coffee, can’t you! Really, this is not the end of the world, but bad coffee is a bad start setting a bad tone suggesting a bad day.

I have been stranded in Cork, where I was once served coffee that tasted like a sheep had died in the urinals. I have lived in England, where the coffee is so … erm … ‘tasty’ that, in a scene cut from Oliver Twist, the Master gave the starving boy English coffee as punishment for demanding more gruel, and was promptly lynched to death by his appalled colleagues. (This is why, incidentally, serving English coffee in Seattle is considered a war crime.)

So you can understand my delight when I came across the Wacaco Minipresso. 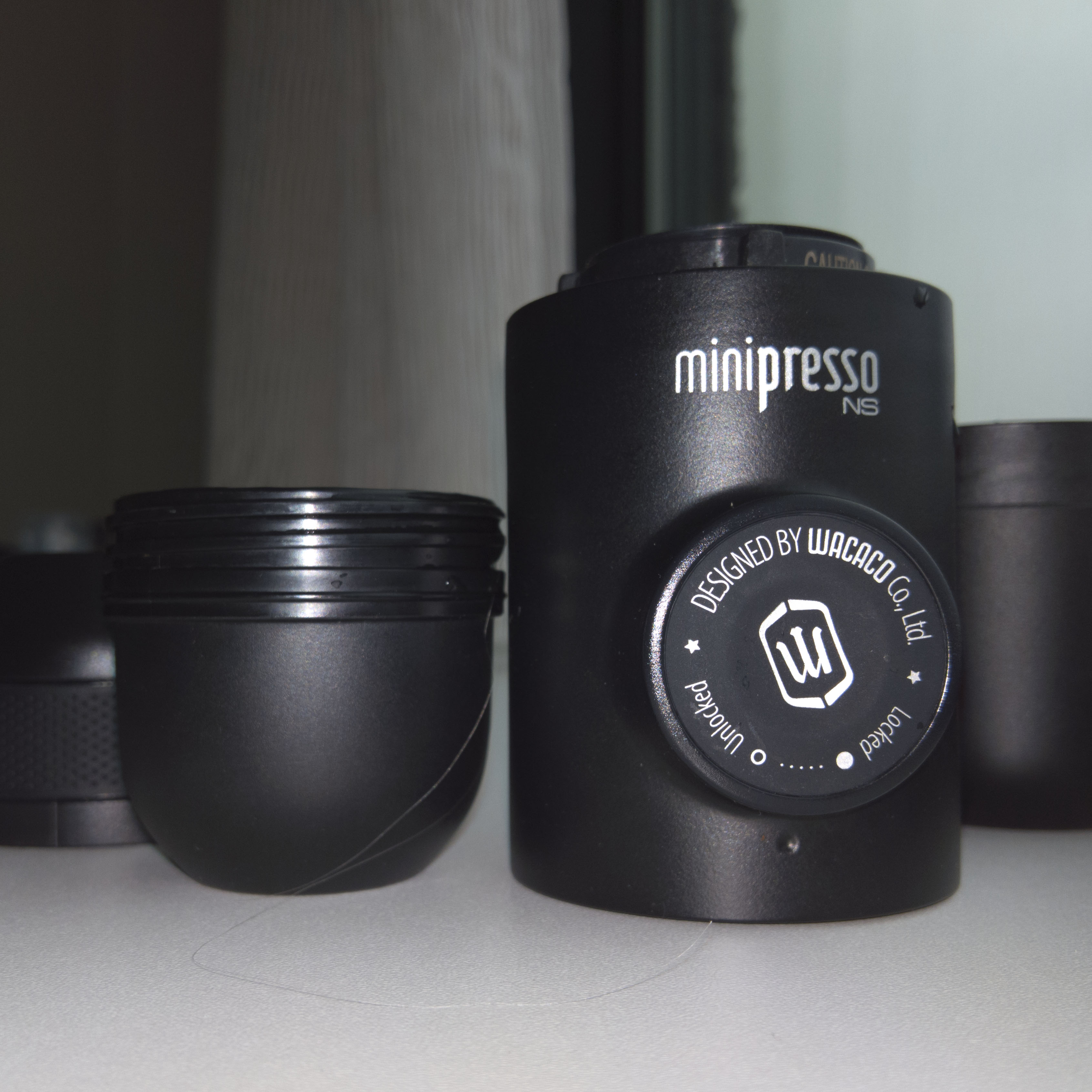 The minipresso is the version of the machine that uses nespresso capsules. Wacaco produce another version for ground coffee, for those who prefer their coffee stale.

The machine, assembled, is a rounded cylinder that feels solid and tough. To make coffee, unscrew one end, insert the capsule in its seat, and screw things back together. Next, unscrew the tank at the other end, pour in boiling water, and carefully reassemble. (You can buy a larger tank if you prefer a lungo.) You free the pump handle with a twist, hold the machine over the cup, and pump away, making a decent espresso, a wee cup of whoosh juice.

The coffee is good. The machine saved me from places that lack the essentials of civilised life. For example, today, I am staying in Utrecht, in an overpriced hotel whose concept of coffee belongs in my concept of horse trough. This device has saved my day, twice now.

But it’s imperfect. First of all, it depends on an external source of boiling water. If you have none, you are in big trouble. That’s not usually a problem, though. Secondly, warm the device before using it, just as you should always warm a pot before making civilised tea. I, being lazy, dozy, and in a.m. need, too often make the espresso without heating the device first. The result is just a little too tepid, although thoroughly flavourful and totally drinkable.

Of course, when travelling, you depend on the local water, which will almost certainly be different from the water at home, so don’t expect to get exactly the same cup every time.

There is one thing that’s a little odd about the machine. You hand pump the water through to make the coffee. This works, although it requires a little strength. Unfortunately, at least with my machine, the pump squeaks like a hamster having just a little too much fun.