I know very little about deva press. Beyond their name on the slides, their old business address, and the photographers’ names on the commentary, there is no identifying information. In particular, I have found no forwarding business address.

Worse, there is no date of publication. That means I don’t know when these slides were produced, let alone whether they are still in copyright. So far as I can tell after on online search, the company no longer exists. There are very few references to it. I believe they are long gone. That makes sense: slide sets predate video, indeed predate ciné, so their commercial value would have died decades ago. 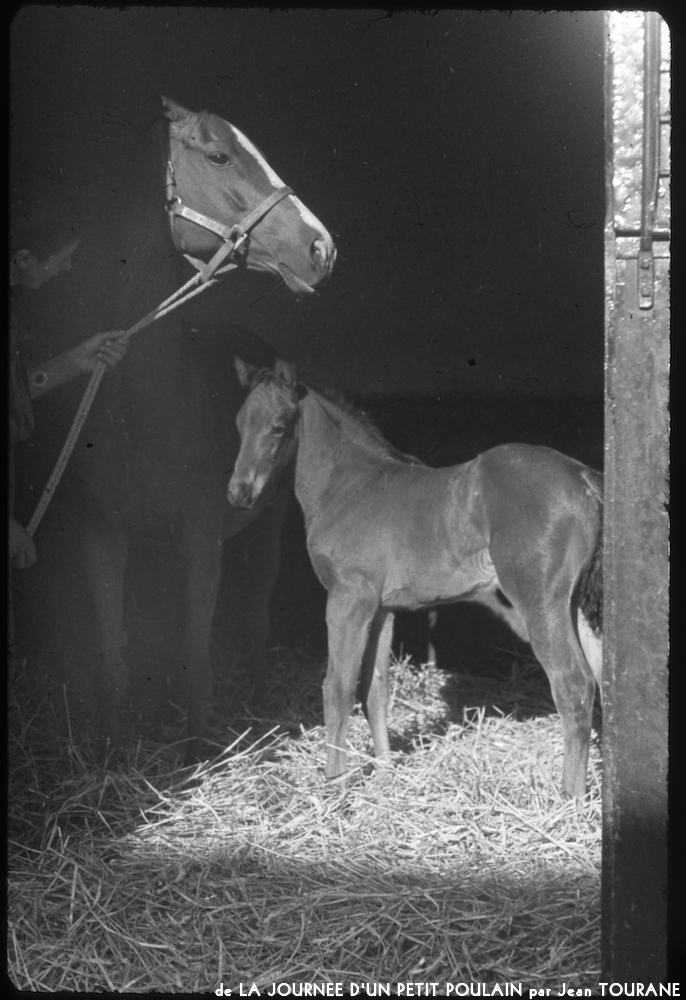 The first slide show I picked up, Deva Press série 24, is by Jean Tourane, and it contains photos of a mare and her foal. I think it’s likely that he is the same Jean Tourane who made a number of animal films in the 1960s. His wikipedia entry says he went from photography to film to politics. In 1964 he made a 78 episode series for French television. This suggests to me these photos were taken in the 1950s or early 1960s.

Having said that, most of the few references to Deva Press I’ve found online are people trying to sell diapositives, and they all say the slides were made in the 70s/80s.

However, I found an authoritative document online that contradicts the sellers’ date range. It’s a record of a court case between Deva Press and the French VAT authorities in 1976 (original link, RTF copy), a failed appeal by the authorities against a court decision made in 1967 which said Deva Press had correctly charged a lower VAT rate between 1962 and 1965. If the French authorities then were like the British authorities a while ago, 1976 could be when Deva Press was wound up. The company’s business in the early 1960s was described as making slides of children, animals, and Africa, for the education market.

That makes sense to me. I remember being shown slides at school in the late 1960s and early 1970s, to illustrate lessons. Later, at polytechnic, I was shown films, then VHS videos.

The court’s description and the probable photographer’s wikipedia entry leave me pretty convinced that these slides were originally published in the early 1960s, if not before. That’s more than 50 years ago, so I think they’re out of copyright.

The copies I bought from the car boot sale are probably reissues from the 1970s. They were sold in plastic folders that haven’t cracked. The typed commentary looks like something produced on a daisy wheel printer, although, because it has a couple of minor errors, I think it’s more likely to be from an electronic typewriter. The paper is good quality, it hasn’t faded (unlike the slides).

My opinion of the dates may change as I scan the photos, especially if I see something in them that clearly dates them. The only thing I see in series 24 that might hint of a decade is the haircut of a stablehand in the shadows: unfortunately, it’s timeless.

An obvious question is this: how do I know the copyright is held by the publishers, and not the photographers? Well, simply, I don’t.

However, the creative publishing industry tends to work in particular directions regarding copyright. If the creator, such as an author, approaches the publisher, then the copyright is usually retained by the creator. However, if an organisation decides to create a work, then commissions artists to make that work, such as the film industry bringing together a grand team to make a movie, then the publisher retains the copyright.

Deva Press published slides for education, so I expect it commissioned them. If it found there was a demand, say, for images of horses, it may commission a photographer to go get them. If it found there was a gap in its output, it could commission someone to fill it. Now, obviously, I do not know this is how they worked, but this is how I expect they worked, which is why I believe this images are out of copyright.

Of course, I could be entirely wrong. With that in mind, if a diapositive copyright holder wishes me to take their images offline, then all they need do is contact me, with appropriate evidence of copyright ownership, and I will remove them.