This was probably my last visit to Bucharest, all else being equal. My contract with my Romanian client has ended; indeed I visited mostly to say goodbye to my now ex– colleagues. 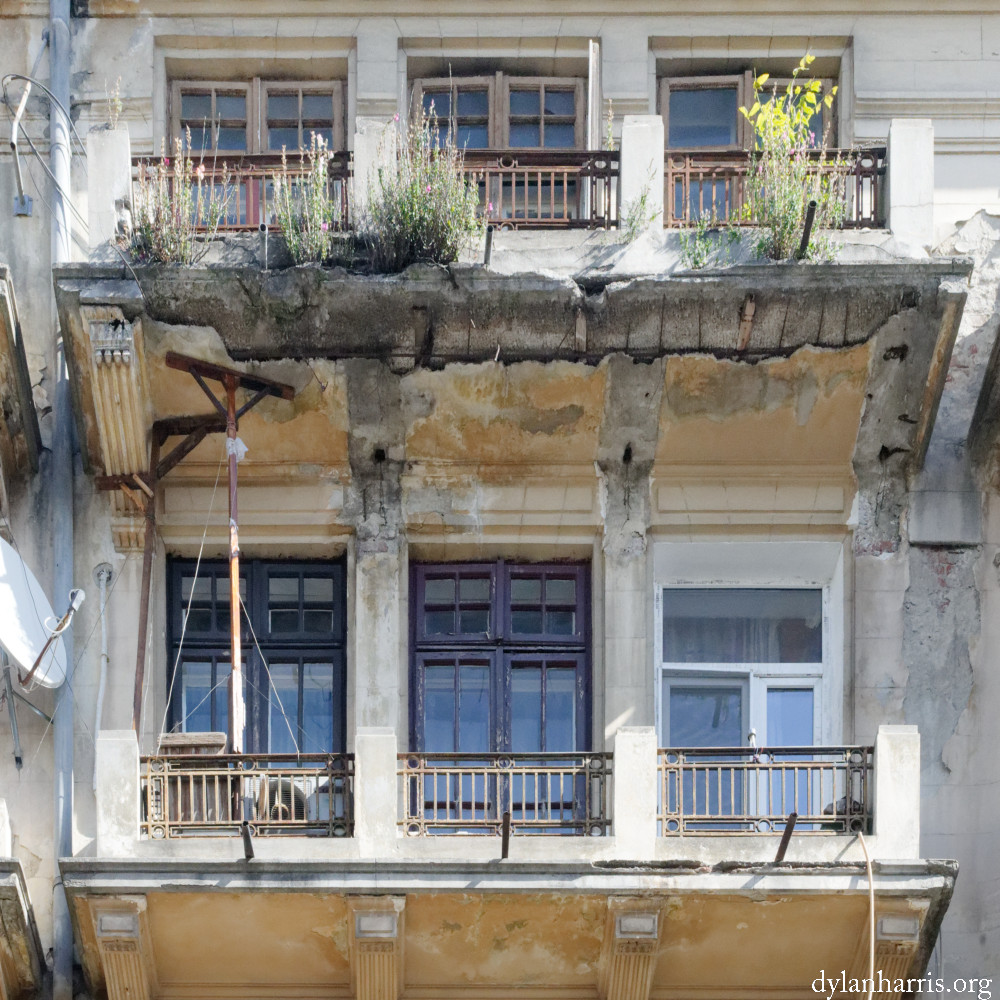 The city is in the process of renewing itself. I took a number of photos of buildings that are in a dreadful state of repair, so much so that when a nasty gale blew yesterday I was very surprised to hear no news stories of some being blown down. I’m not sure whether that’s because all stayed standing, or whether old buildings collapsing is so day–to–day that it’s not worth reporting.

Although I took no photos of newly renovated buildings, it’d be unfair on the locals not to mention them. So, voila, my mention! Actually, most of the renovations are pretty similar to average buildings in Luxembourg, so they didn’t fire up my desire to point and click. There were some better buildings, admittedly, but I saw them when the sun was in the wrong mood, so no photos.

The exception are the restored churches. I couldn’t resist shooting the brickwork. Here, such brickwork is unique and special, and very well and carefully done, but oddly reminiscent of many a house in Mechelen, when I once lived. The brickwork is the texture of the coat of the church: you can tell something about someone by the clothes she wears.

My visit coincided with the weekend before QE2’s funeral. People hearing my accent would ask me for my reaction to the sad news, so you will understand why I went out of my way to spend much of the weekend alone. I wandered the place, undoing a little of physical damage of a year’s teleworking, trying to retrain my eye.

Bucharest is a cultural city, so there were arts events. I ran into a poetry festival. I didn’t visit: I only speak a little of entirely the wrong Romanian language, but, bizarrely, I did pick up a collection of contemporary Romanian poetry translated into French.

There was also an event of some kind that resulted in a major thoroughfare being closed and pedestrianised. Buskers took the opportunity to busk. Their quality here is actually very high, perhaps even better than Cambridge when it’s in a good mood, far better than Paris and London, although admittedly not a touch on Dublin. My one sadness is the majority of buskers performed cover versions. I heard very little Romanian, and I have no clue whether the Romanian I did hear was covers of old songs or something from the buskers’ soul. When buskers do cover versions, it tells me the music scene’s dead.

I came across a very good busker performance of Frank Sinatra’s my way. The guy really could sing that song as Sinatra sang it, given my rusty recollection. Of course, since I visited while the UK was mourning HM QE2, you will understand why I really would have preferred to hear a cover of the Sid Vicious version. That was only cover I know of that was true to the words; Vicious sang the song his way, not Frank Sinatra’s way. But I was in Romania, so it’s hardly surprising I heard nothing suitable for the mourning of a foreign queen.

Talking about Sid Vicious, I think his life story is classic tragic chamber opera material. A member of a revolutionary dark band, a band hated then loved, a Marmite, a band that changed the musical world, then broke up, and whose frontman would gloriously detest this paragraph, I hope (not that he’ll ever see it). Vicious finds the love of his life, who is murdered (the evidence suggests her drug dealer). He seems to suicide by overdose. The NY police don’t bother to investigate her murder because, in their lazy bigotry, they just presume he did it. (Ok, that last bit’s entirely unfair, and that unfairness, the irony, and the poignancy, would make an ace string quartet underpinning an ace last scene). The music, of course, is why such an opera wouldn’t be written until well after copyright has faded away, long after my time.

Anyway, back to Bucharest. As I mentioned in another blog entry, it likes to call itself “Little Paris”, wrongly in my opinion. Indeed, it reminds me more of London: crap pavements, just like when I was a student, and lots of green spaces. The latter I like, and the latter distinguishes it, positively, from Paris.

So, goodbye Bucharest, I think. I love your women, I like your style: I would love to visit again.