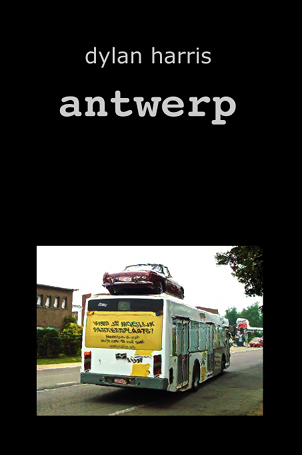 buy the book from lulu


“Antwerp just in, a first book, by one Dylan Harris, full of vivacious, energetic poetry that’s a shock to the ear and mind, a delight. And funny. It reminds me strongly of the late, great Bill Griffiths. Griffiths in a good mood though. It doesn’t get much better than that. Dublin’s gain is Cambridge/Antwerp’s loss—how did we get so lucky? Beats me.” (Maurice Scully)

“I haven’t seen anything of yours since you left Cambridge, and I think your writing has matured. There are fewer places where you can’t be followed, or where the word order has been denormalised but we can’t see why. And you’re more willing to let both wit and scenes emerge, however bittily. The poems have more of a speech act about them, perhaps that’s what it is.

Your best poems are clear, in a particular manner of verbal clarity. The sonics are so projected and balanced that the words effect their own realisation. I think. Like that sudden “Appleby” ” (Peter Riley)

“Multilingualism and cosmopolitanism are strong features of Harris’s work; in antwerp there are poems “set” in Ireland, England, Belgium, Luxembourg, and Germany. He writes in “new city”: “gotta stop / being English // Engels.” The chapbook that preceded it, also from Wurm Press, is titled europe. Harris has lived around the continent and views both place and language through the illuminative lens of a serial explorer. Rarely, though, does place come before language. And he is comfortable across forms: he has published work that fuses poetry and photography, while his interest in computer programming bears an influence. An advocate of the Creative Commons, Harris seeks through his work as publisher of Corrupt Press to promote work in English from poets whose first language isn’t English or who live in non–Anglophone territories, aware of the aesthetic and conceptual richness that may result through approaching language or cultural entitlement at a slant. It’s a wonder this idea, championed by Beckett among many, still seems such a novelty.’ (Christodoulos Makris, Jacket 2, Monoculture beer no more)

“Language belongs to and belies everybody and what Dylan Harris does with it is play. He zooms fools improvises warbles trounces postulates but he never shuts or struts up–and–or–down. There is fun–light–delight–fight here and below–all zest–in–of–and–for–life. I found at least one spelling miss–take and plenty of smelling piss–takes and so might you. All languages have gaps and holes seam–lines and edge–faults and through some of these a poet may open funds and finds. Language vests and invests the real gating and investigating what maybe is was and may be. Dylan Harris is an investor a gate–opener an investigator. ” (Richard Berengarten)


an other peoples’ country
strangers’ land across the corner

in these my alien eye see
in these that

a broad brit abroad
behind the time wall


“I have always had a problem with the concept of so called ‘language’ poetry, I am not sure what it is and whether it really exists, as language is the basic tool of all writers and poets. A while ago I threw myself at poems or poets who have been dubbed ‘language’ poets in a desire to understand, to grasp what it is all about. I went to lectures at Cambridge University given by those who were deemed by those ‘in the know’ to have the gift of being able to interpret this speaking in tongues. I struggled, I sank and then I heard Dylan Harris read some of his work at a small café in Cambridge and I suddenly had a life raft thrown my way, I realised it was all about not grasping but letting go, it was not about trying to tease out meaning but bringing my own meaning to it. It was ok not to ‘get it’ because the very act of striving and being anxious about ‘getting’ negated the poem itself.

Dylan would probably not place himself in any poetry pigeon-hole because that would go against everything he and his poetry is about. The poems in ‘Antwerp’ defy definition. Some come at you with full beam language headlights that dazzle and make you loose the edges of the road as in the opening poem, ‘this ‘bright’ light’, others such as ‘Animal Magnetism’ catch you unawares and pull a face at you and make you laugh. As an aside it is refreshing to find a few poems in this collection that, whilst still asking something of the reader and their own iconography of words, can still make me laugh out loud at the surreal humour they contain.

Other poems I have thrown myself into their deep end and revelled in the words, the images and the emotions they evoke for me. The sense of the outsider infuses the whole collection; the stranger in a strange land lends an eye to many of the poems. The use of language that bounces off landscapes and cityscapes, bars, trains, restaurant walls, internal walls, disorientate yet still allow the reader to experience some points of reference that make the journey one worth taking. I found in the poem ‘for pete’s sake’ a moment when I experienced at almost a visceral level, the use of capitalisation, the use of the word ‘still’ being turned into an active past tense verb. Syntax and meaning were no longer, for me, a comfort blanket to retreat to, my default mode; the words themselves reached out and twisted my gut.

Dylan Harris’ collection is something to be cherished in any world where words and what they are, are valued. I am loathe to say what words can achieve as this would be to miss the point, in this collection the words don’t set out to achieve anything, they stand in their own space and simply occupy it and if you enter that space you can create of it something important of your own. ” (Andrea Porter)